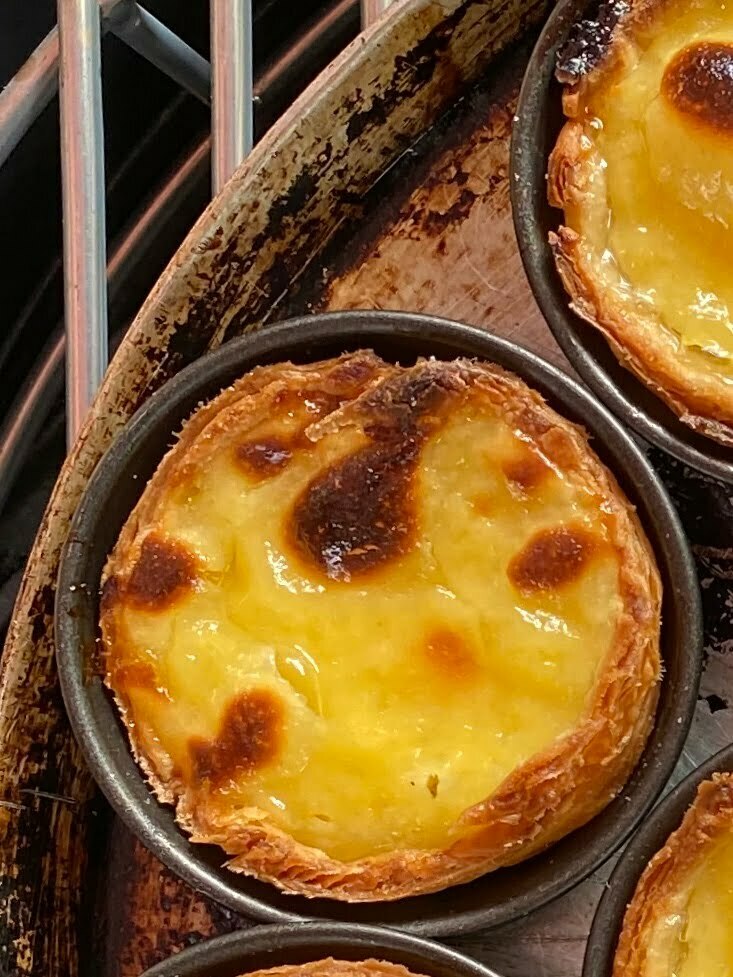 Need some Inspiration? Want a challenge or ready to try something different? Try this delicious recipe for Pastel de Nata (Portugese Custard Tart) from Everdure.

In the bowl of a stand-up mixer fitted with a dough hook, add the flour, salt, egg and some of the water. Begin to mix on low speed and start adding the remaining water, keeping it mind it may not need all the water. Continue mixing until smooth dough is formed; continue mixing until the dough becomes elastic. Remove from the bowl, cover in cling film and place in the fridge for 30 minutes.

In a clean bowl of a stand-up mixer fitter with the paddle attachment, add the butter and the lard. Begin to mix at low speed for a couple of minutes followed by a few minutes at medium speed or until the mixture has become one. Divide into 3 equal parts.

Roll the dough one more time into a large rectangle measuring 1/2 cm in thickness. Spread the remainder butter on the surface of the dough. Lifting the dough from the longer edge, roll the dough into a long cylinder. Place on a tray covered with cling film and place in the fridge for 15 minutes. Cut the ends of the cylinder. At this point the dough could be cut into smaller cylinders and kept in the freezer.

For the custard, make the syrup by adding the sugar to 500g water in a pan over medium heat. Add the lemon zest and cinnamon and allow to boil until the mixture reaches 105°C. Remove from the heat and set aside.

To make the cream component of the custard, place the milk into a medium size pan over medium heat. Add the cornflour and allow to simmer while whisking, until the milk thickens. In a bowl, combine flour with 200g water until completely mixed. Add in the warmed milk and mix thoroughly.

Then, add the syrup to the cream and whisk until mixed through. In a separate bowl, whisk the egg yolks and eggs until light and creamy. Add some of the cream mixture and continue to mix to temper the mix. Slowly add the rest of the cream mixture while continuously whisking. Allow to rest for 1 hour. Strain the mixture through a fine mesh sieve discarding the lemon zest and cinnamon stick.

To assemble, cut small discs out of the dough and place in individual tins measuring 5.5cm in diameter and 2cm in height. With wet thumbs, carefully press the pastry down and spread to the sides of the tin, ensuring the pastry is even in thickness throughout.

Preheat the Furnace BBQ and place a pizza stone inside. Close the lid and allow the temperature to come to 350°C. Fill each pastry case with the custard and lightly torch the surfaces of each with a blowtorch. Place 10-12 tins at a time on the pizza stone and close the lid. Cook for 12-14 minutes before carefully removing the tins and setting aside. Repeat until all the tins are cooked.

Allow the cooked Pastel de Nata to rest before removing from the tins. Serve warm with powder sugar and ground cinnamon on top.